THE LINE – This project, consists of 6 photographs, tells about the situation of animals in our, human world. It is impossible to comprehend the immensity of their suffering in such a short form, the series is an attempt to analyze and to get closer to understanding this theme and creating the picture „Ophelia” which shows the subject in a poetic way.

When all 6 photos will be hanged  side by side in the correct order, their compositions will create a line, the line of life and hope for change. The first and last photo, is referring to „Ophelia”. They compositions (like in Ofelia photo) closed with compositional arcs.

It is the same story, told in different way so as to increase the chance of the viewer understanding the topic. 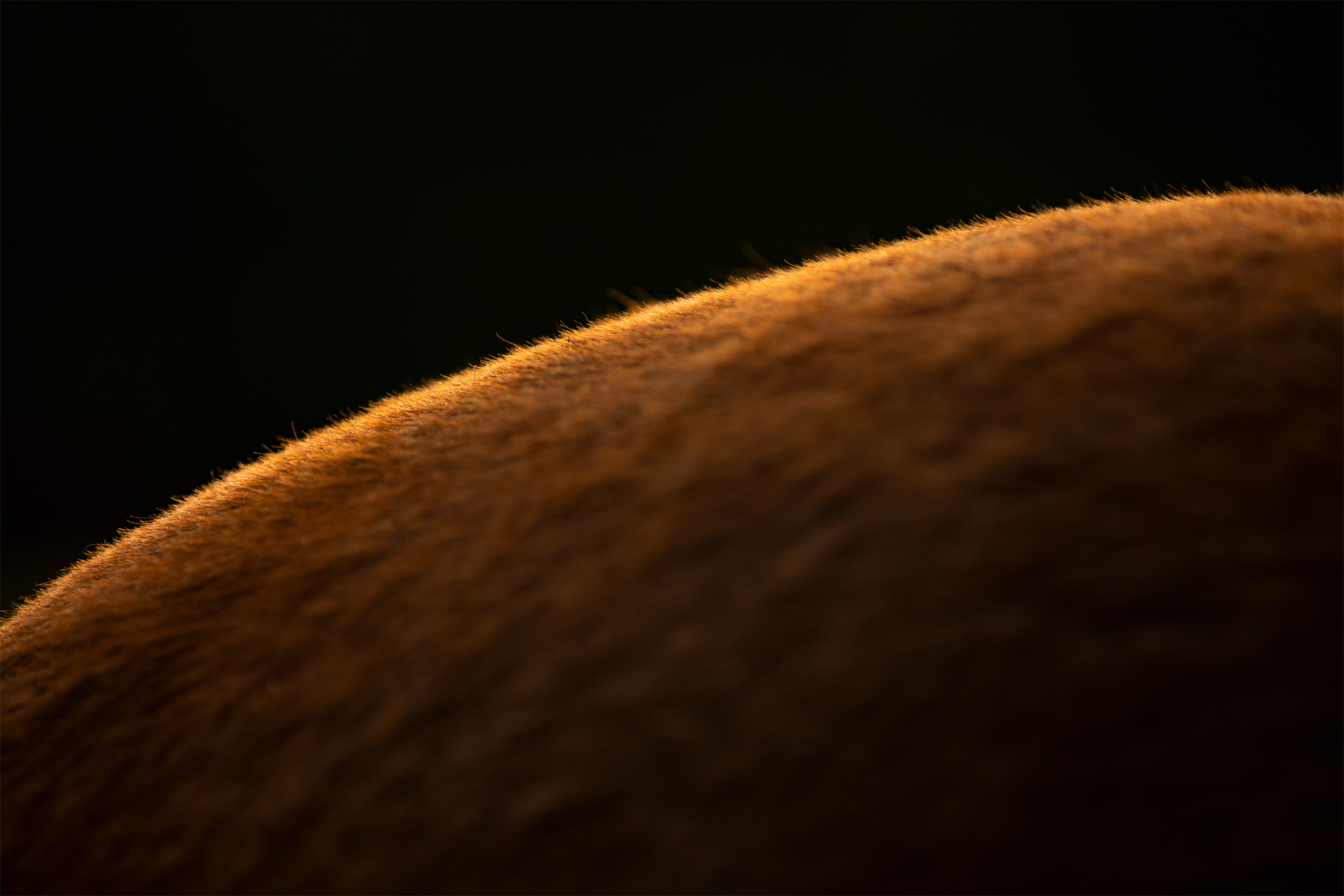 The project tells about the tragic fate of horses in relation to man. We love horses for their beauty. We buy paintings, photographs, sculptures, but we are not really interested in them at all… We do not equate this idealized image with their real fate. When they are too old, too tired, too individual, sick or simply unnecessary, they end up on fairs, and then on death trains, at best straight to the slaughterhouse. In trains, they are transported across Europe in tragic conditions, with broken legs, trampled, and in terrible suffering, they go from Poland to Italy, France and Belgium. Initially, the photo was supposed to show only one horse, but in the multitude of such tragic stories of these beautiful animals, I decided that a completely different approach to the subject was needed. The photo shows only a fragment of a horse’s body, it is supposed to resemble a planet – in global terms, a place of great pain. I intentionally gave up presenting the most beautiful fragments – the head, muscles or the silhouette of a horse… We forgot about them.

The title of the photo refers to a hundred horses saved from such a fate by a foundation that runs a shelter for them. 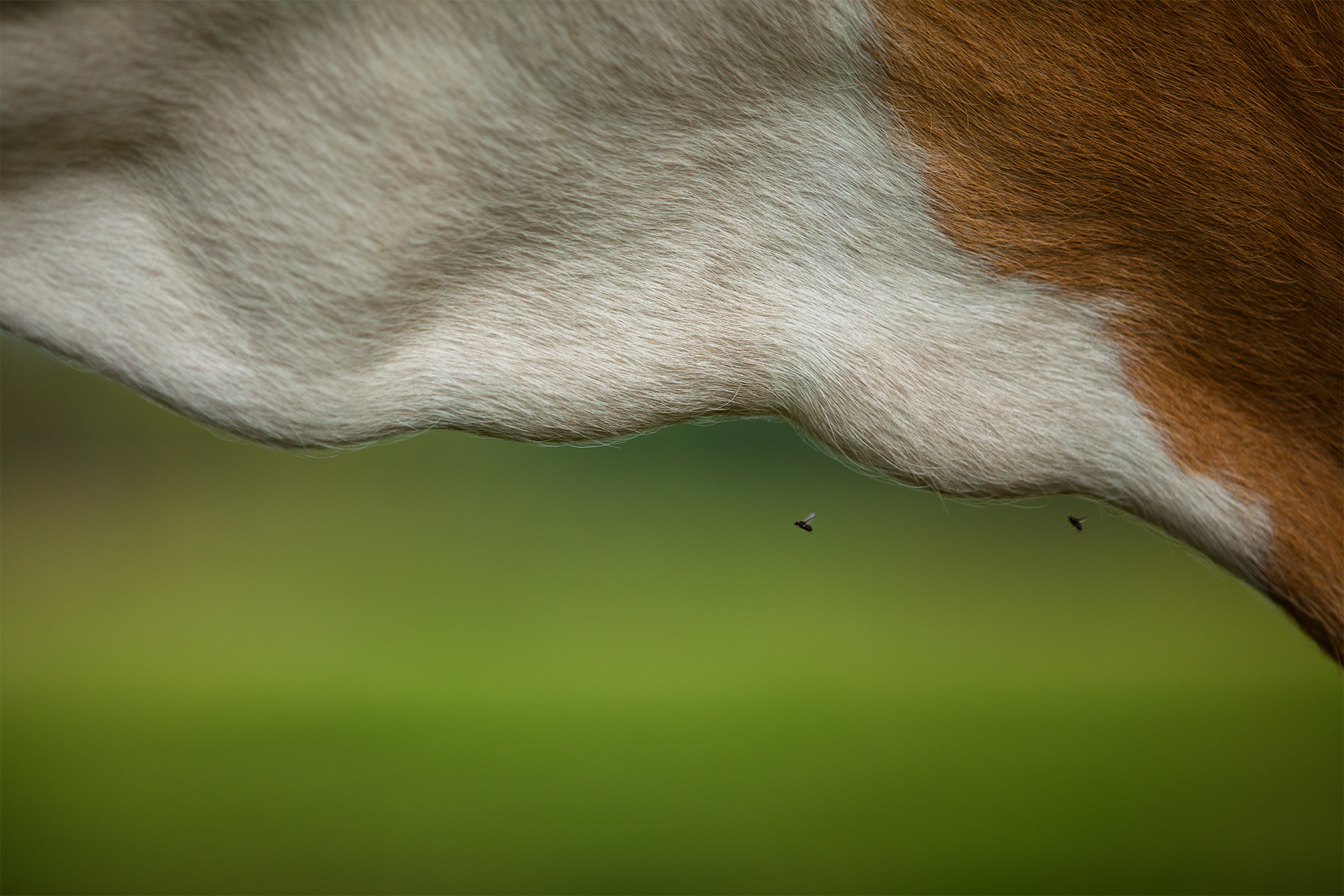 The photo of 60 cows is a story about a large herd of cows that was an inseparable part of the landscape of a village in Poland for many years. Suddenly, one day the herd just disappeared. The animals were sold and taken to the slaughterhouse. They were killed within moments.

At the same time, information about the new milking technology appeared in the press. 60 cows stand in boxes arranged in a circle, they are fed and milked without human intervention. they are devoid of contact with other animals, with the sky, grass, or fresh air … They spend their whole lives locked up. This technology increases the efficiency of dairy cows by 30%, but after 2 years their productivity drops significantly, so they go to the slaughterhouse. There are 60 new cows in the circle.

The photograph shows a cow’s dewlap and two flies flying underneath it, suggesting a threat that heralds imminent death. The composition of the painting refers to an aerial photo, a fragment of land and water. This is the broader context of the problem of industrial animal husbandry.

The photo of 60 cows is part of „The Line” series, devoted to the dramatic fate of animals in the „human” world. All photos from this series, hung next to each other, form a composition that forms a line – the line of life. 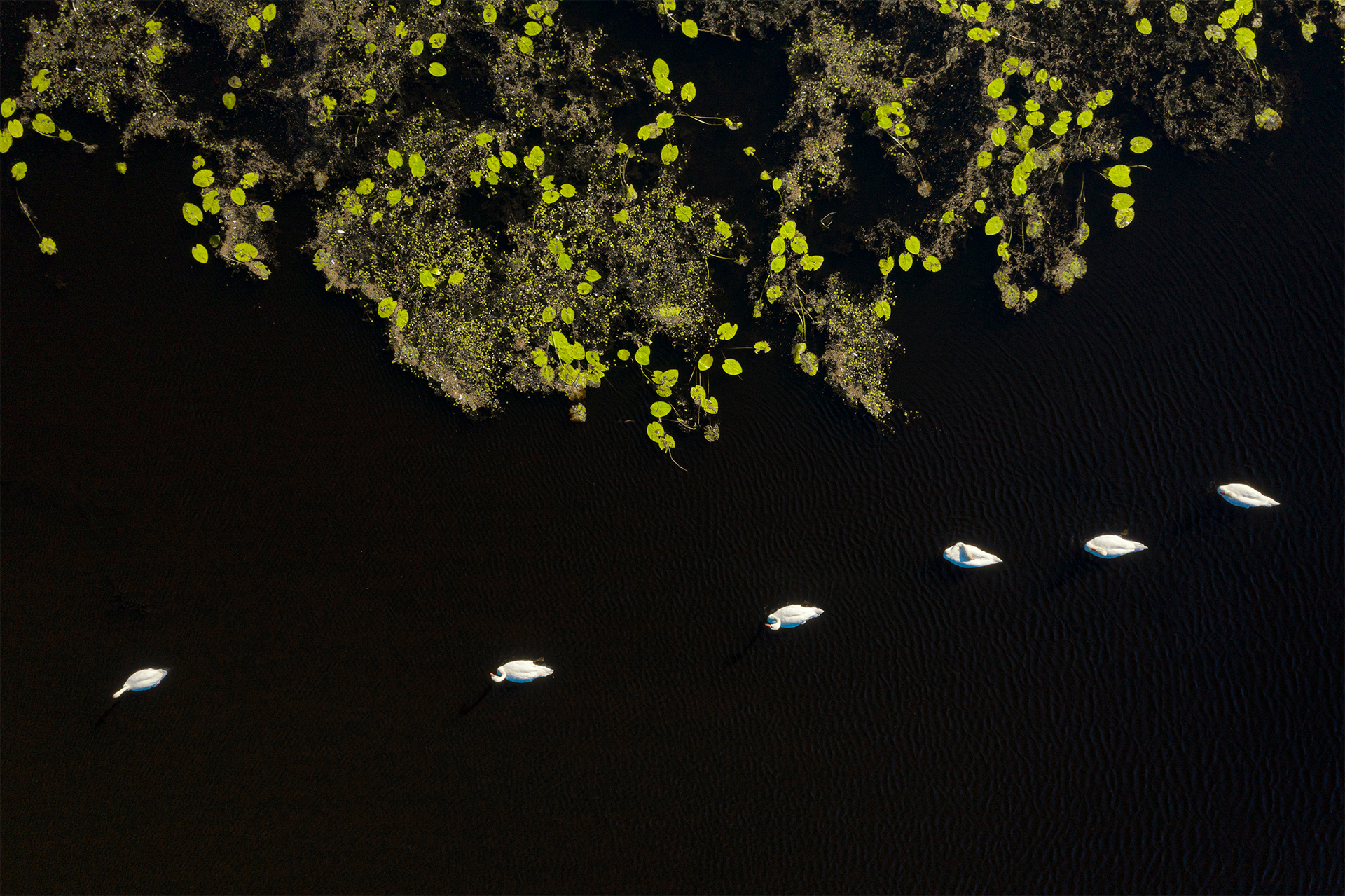 This is a story about a flock of mute swans, migratory birds that fly away to warmer countries in autumn. However, this is not always the case in Poland. In summer, when people feed these beautiful birds, it makes them decide to stay in the same place during winter. Unfortunately, when the temperature drops to minus values, it has dire consequences. They often die massively frozen to the water surface, as well as starve when everything is frozen around.

The scene shows part of a flock of 13 mute swans, just before making a decision to depart for warmer countries. 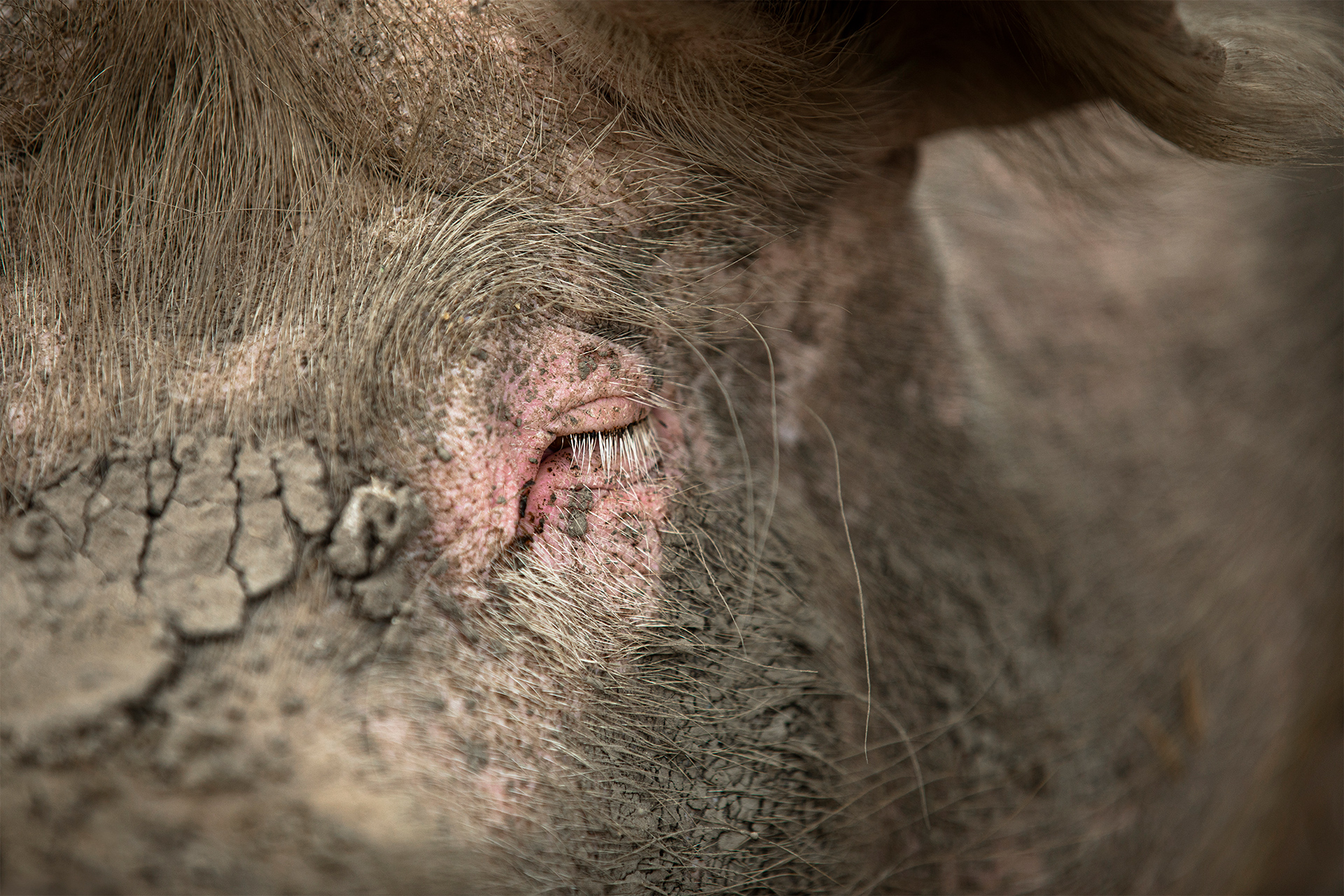 The photo shows the story of one rescued pig that ended up in the „Chrumkowo” pig shelter in early 2021. It all started when, at the request of a veterinarian, she was taken from the breeder for mistreatment. Officials wanted to hand her over to a slaughterhouse, but volunteers from all over Poland came and protested outside the office, calling for her to be transferred to a shelter. Under pressure from public opinion, officials agreed to this. When she got to the shelter, she was given the name Arek. Volunteers taught them about wind, sky, mud, fresh fruit, and the company of other animals. After 2 months, a little pig Zuzia came to the shelter, Arek adopted her and from then on they are inseparable – his dad and his daughter.

It’s a beautiful story that wouldn’t have happened in our non-human world, yet. This gives hope that we can change the fate of animals… 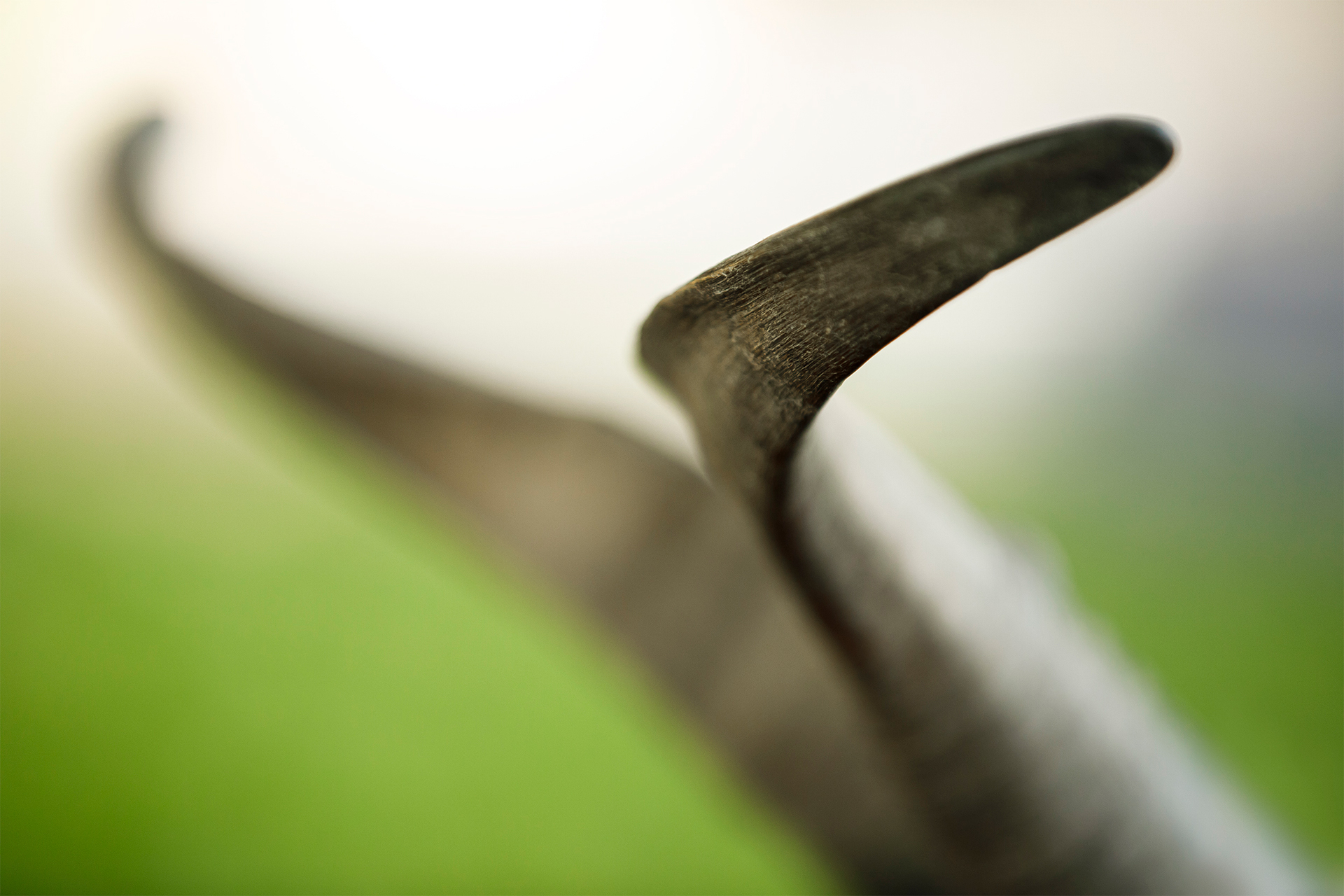 In 2016, in Oregon, Mrs. Lainey Morse created a new type of yoga session. People train in the presence of little goats. The animals are happy to accompany them, they can be petted, they jump on the exercising people during training. The mere contact with goats allows for deeper relaxation, the touch calms down, and their antics give you energy and put you in a good mood. These animals are very sociable and curious, they willingly take part in joint activities. This shows how much good we can give to each other, live in symbiosis without cages, without suffering.

In everyday life, we have forgotten about communing with nature, with animals that can be the best remedy for stress, loneliness and depression.

The photo is inspired by the story of 40 goats participating for the first time in Poland in the Goat Yoga session in 2018. Exercises with goats were incredibly successful and are a permanent item in the calendar of one of the animal shelters, the pioneer of Goat Yoga in Poland. 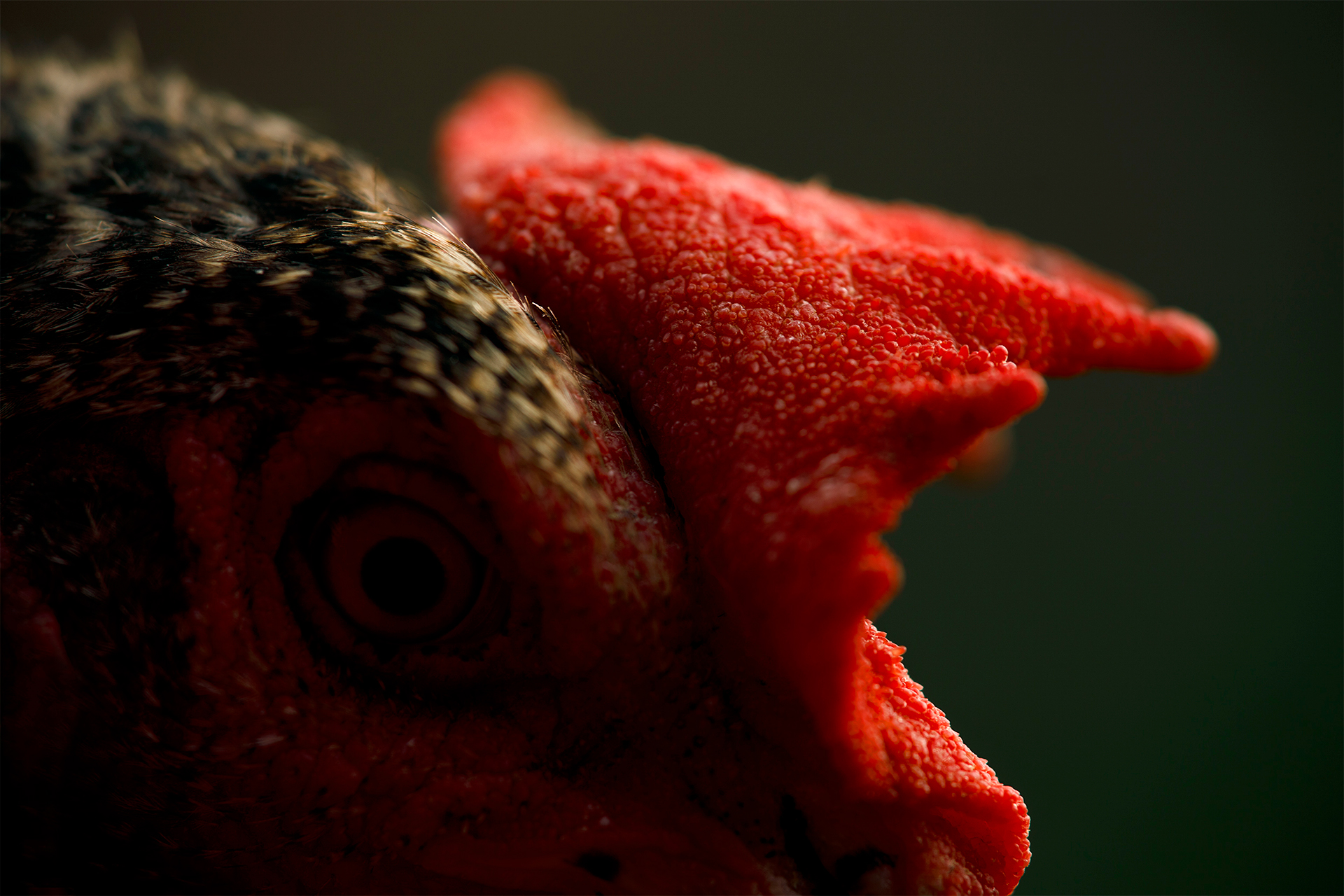 The age of the hen can be recognized by the size of its comb, the older it is, the bigger it is. The photo shows a hen about 3 years old, living in the village, on a small farm. Nobody is going to kill her here, the bird will live to die naturally. According to the words „it’s good that you are”, nobody requires anything from her. As the farmer says, he sometimes gives eggs and the most important thing here is the word „gives” … On this farm, there are 42 happy hens who sometimes give eggs to their hosts.

In industrial breeding, hens live 6 weeks. First, when they hatch, they are divided into groups: for meat, for eggs making and for immediate killing. The hens for meat, which is later bred, receive a special feed that causes them to gain weight very quickly. Those that are weaker or smaller than the others are immediately brutally killed on the spot. In the 5th week, the chickens gain supernatural weight, when they fall over, they are not able to raise themselves anymore, breeders turn them so that they can eat and drink. In the 6th week, the hens are no longer able to bear their weight, they lie on the bedding. At this point, they are collected and taken to the slaughterhouse. In a moment, new, beautiful, pink pieces of meat on plastic trays, secured with foil, will appear in the store.